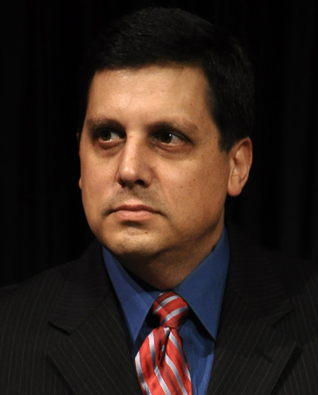 Ara Khachig Manoogian is a human rights activist, an investigative journalist, Artsakh representative for the Shahan Natalie Family Foundation and a member of Policy Forum Armenia. Human trafficking, illegal adoption practices, army abuse and government corruption in Armenia and Artsakh, are among the issues, with which Manoogian is primarily concerned. His activism has been widely covered by Radio Free Europe/Radio Liberty, Hetq, Keghart, Hraparak and other media outlets. Ara K. Manoogian is the co-author Desert Nights (2006), a book and a documentary, which uncovers a large international human trafficking network functioning in Dubai, involving representatives of the Armenian and UAE law-enforcement agencies.

Ara Khachig Manoogian was born in 1965 in Pasadena, California, to Khachig Evan and Sylva Natalie Manoogian. His maternal grandmother was a direct descendant of the Bagratuni Dynasty, who ruled over the Armenian Nation from the 9th to 11th century. Ara’s maternal grandfather is Shahan Natalie, one of the masterminds behind the executions of the Young Turk leaders responsible for the Armenian Genocide of 1915, and those that conspired with them. He is also the nephew of His Beatitude Archbishop Torkom Manoogian, Armenian Patriarch of Jerusalem.

Ara traveled to Armenia for the first time with his parents in 1989 as a videographer to document a project that the Eastern Diocese of the Armenian Church of North America and the American Library Association had undertaken in Armenia’s 1988 earthquake zone. Concerned by the hardship of the Armenian citizens, Ara made numerous subsequent fact-finding trips to Armenia and Artsakh from 1992 to 1997. He documented on video, in photographs, and journals the daily lives of common people to better understand their needs and find ways to make their lives more bearable. Thanks to his active stance in addressing socio-economic issues in Armenia, as well as the long and frequent visits to Armenia, Ara K. Manoogian was elected the President of the Monte Melkonian Fund in 1995 and served until 1997.

In 1998 Ara moved to the town of Martuni, Artsakh, where he coordinated and monitored a number of aid distribution initiatives. At the same time, he has been whistleblowing on government corruption both in Armenia and Artsakh, helping common citizens benefit from their civil rights without having to pay bribes to public officials.

In 2000 he became the Artsakh representative of Shahan Natalie Family Foundation, Inc. (SNFF), a California non-profit public benefit corporation, established by the members of the Natalie/Manoogian family in 1999. Dealing with social, economic, cultural, and educational issues in Armenia and Artsakh, the Shahan Natalie Family Foundation became the third Non-Governmental Organization (NGO) ever to be registered in Artsakh, following the Red Cross and the “Hayastan” All-Armenian Fund, since its independence proclaimed in 1992. One of the major charitable projects implemented by the Artsakh branch of the SNFF was Hand-to-Hand in 2006, intended for the relief of the people of Kashatagh, Artsakh.

His first major initiative was to curb corrupt adoption practices in Armenia (click here to learn more). In 2003, posing as a potential adopting parent, Ara was able to uncover an entire mechanism of prospering illicit adoption business. The problem was specifically related the illegal adoptions of Armenian children outside Armenia by U.S.-based companies. Thanks to his findings, the Armenian National Assembly adopted new laws to enhance the adoption process regulation. However, a recent monitoring of the field (2011) has shown that stricter laws have only made the illegal adoption procedure more sophisticated. In March 2011, Ara K. Manoogian embarked on a new phase of his struggle against international child trafficking from Armenia, organized by U.S. based adoption agencies (learn more).

In early 2004, joining with the Hetq Investigative Journalists of Armenia and the SNFF began an investigation into the trafficking of women and children from Armenia to the United Arab Emirates (learn more). This was the operation Desert Nights, which ended up becoming one of the most significant projects of the SNFF. Exposing their lives to danger, Ara K. Manoogian of the SNFF and Edik Baghdasaryan, editor-in-chief of Hetq weekly eventually succeeded in setting a number of victims of human trafficking free and preventing thousands from treading on the same path by raising awareness through Desert Nights, a widely distributed book and a documentary by the two journalists. “The most important work on human trafficking for sexual exploitation is Desert Nights,” writes the OSCE in its report on Human Trafficking in Armenia (in Armenian).

As a result of the investigation, numerous criminal cases were filed against pimps and traffickers, more than a dozen were jailed. The investigation also implicated Rafayel Gyulnazaryan, the head of the anti-human trafficking department at the United Nations in Yerevan, as a part of the trafficking ring. With the help of the U.S. State Department, he was dismissed from his post. The evidence provided by Ara K. Manoogian and Edik Baghdasaryan about the involvement of the Armenian law-enforcement in the human trafficking network has been denied by the Armenian authorities since 2005. However, on February 18, 2011, WikiLeaks released cables of the U.S. Embassy to Armenia, dating back to 2006, which proved the evidence.

Ara K. Manoogian has played an active role in resolving the violent murder of Nazareth Berberian, an American-Armenian philanthropist and businessman, in Yerevan, in April 2009. With the intention of getting to the bottom of the truth about the high-profile murder case, Ara dedicated months to a parallel field investigation, which led to uncovering corrupt practices within the Armenian Police system, as well as gaping drawbacks in forensic examination (learn more).

In September 2010, after a scandalous YouTube video of an Armenian officer’s sadistic treatment of two conscripts was removed shortly after the upload under the authorities’ pressure, Ara K. Manoogian who had managed to download the video, put it back on YouTube through his own channel, which caused a surge of wrath in the Armenian society. Despite calls from the Police Department of Armenia and the Defense Minister of Artsakh, as well as numerous angry emails, death threats, demanding that the video be removed, Manoogian refused to comply. The video went viral and created unprecedented public pressure, resulting in the offender’s arrest and conviction. (Read “Lynch Mob vs. Civil Society” by Ara K. Manoogian to learn more).

Ara K. Manoogian’s activism has been thoroughly recorded in his blog, Martuni or Bust! established in 2001. Nine years later, he also launched The Truth Must Be Told, a web project, where he publishes his reports on key issues concerning government corruption and human rights violations in Armenia and Artsakh. One of them is “To Donate Or Not to Donate?” (2011), a white paper on “Hayastan” All-Armenian Fund, which explores how government corruption has been affecting the Fund’s efficiency since its establishment.

After Armenian MP Ruben Hayrapetyan’s bodyguards’ victim Dr Vahe Avetyan was pronounced dead on June 29, 2012, Ara K. Manoogian played an essential role in consolidating the Los Angeles Armenian community to stage a series of protests in front of the Consulate General of the Republic of Armenia in Los Angeles (Protesters gather at Armenian consulate in Glendale). During the protest, Ara K. Manoogian handed the Consulate General a petition demanding termination of MP Ruben Hayrapetyan’s powers and involving him as a suspect in Vahe Avetyan’s murder case. Manoogian also helped organize the Los Angeles Candlelight Vigil organized in all the major Armenian communities throughout the world in commemoration of Vahe Avetyan on the 40th day of his death on August 7, 2012 (Los Angeles Candlelight Vigil Commemorating Vahe Avetyan On the 40th Day of His Burial).