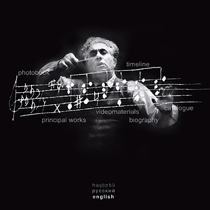 The great Armenian composer’s life and music are presented in his letters, works, archive documents, contemporaries’ memories, over 400 photographs, video materials, as well as  in 35 musical fragments. The CD-Rom—its concept, script, digitization of the photographs, artistic design, programming—was produced by Yerevan-based BazmaWEB Studio and Information Technologies Foundation (ITF) in 2005. The publisher is Aram Khachaturian Museum.

“Aram Khachaturian: The Life & Works” has won the World Summit Award for the best E-Culture Content, as well as the Mashtots 1600 All Armenian e-Contest, likewise, for the best E-Content.

Below is the video of the presentation of CD-ROM by Garegin Chugaszyan, President of the ITE, at the Western Diocese of the Armenian Apostolic Church of North America, on May 5, 2011.

A copy of “Aram Khachaturian: The Life & Works,” award-winning, unprecedented multimedia DVD, can be yours with a donation of $45 to SNFF.

Chugaszyan is the Execturive Director of Information Technologies Foundation (ITF), which specializes in web and e-content development. On Friday he spoke in general times about the activities of the company, related to developing content with various tools for CD/DVDs.
Among such tools are texts, images, music, video and other media, which help the user study the material or the person in question. Chugaszyan illustrated that communication with the help of a computer and a big white screen, presenting three CD/DVD-ROMS, two of which have received international awards.