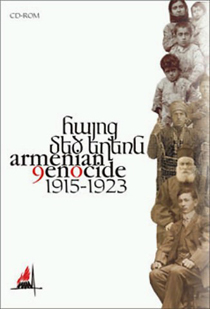 The Armenian Genocide of 1915-1923 is presented in this multimedia CD-ROM through more than 500 photographs, documents, eyewitness accounts and interactive timeline. The CD-Rom was produced by the Yerevan-based BazmaWeb Studio and the Information Technologies Education (ITE) in 2005.

“Armenian Genocide of 1915-1923” received recognition by the World Summit Award 2005 Grand Jury as one of the top 10 products in e-learning category and was given special mention. This CD-Rom was the winner of the “Mashtots 1600” All-Armenian e-contest as the in e-learning content.

“Armenian Genocide: 1915-1923” multimedia CD-ROM was presented by Garegin Chugaszyan, President of the Information Technologies Foundation (ITF), live at the Ararat-Eskijian Museum, in Mission Hills, CA, on June 5, 2011. Below is the video of the presentation in English (also watch the Armenian presentation).

Chugaszyan is the Execturive Director of Information Technologies Foundation (ITF), which specializes in web and e-content development. On Friday he spoke in general times about the activities of the company, related to developing content with various tools for CD/DVDs.
Among such tools are texts, images, music, video and other media, which help the user study the material or the person in question. Chugaszyan illustrated that communication with the help of a computer and a big white screen, presenting three CD/DVD-ROMS, two of which have received international awards.