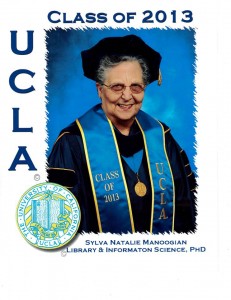 Returning to academia in 2003 as a doctoral student after a 35-year career in public libraries, Dr. Sylva Natalie Manoogian specializes in information institutions, resources, and services to culturally and linguistically diverse communities in dispersion, with particular focus on international librarianship, Armenian culture and identity.  Her global linkages, varied professional experiences, and innovative approaches to multilingual library and community services provide her a distinctive practical and critical lens with which to initiate research, contribute to scholarship, and mentor future generations of information professionals.

Sylva Natalie Manoogian’s career as a library professional began in 1964 at the Los Angeles Public Library (LAPL). During her 35 years of employment, she was promoted from intermittent clerk to principal librarian and “retired” in April 1999. During her 18-year tenure as the Central Library’s International Languages Department Manager, she instituted the Language Learning and Literacy Centers, with their independent study and Laubach Way to English tutorial programs. During her last three years as a library administrator, she served as the Northeast Area Manager.

She devotes vast energy as a volunteer consultant to Armenian library projects worldwide, primarily in Jerusalem and Armenia; as a substitute reference librarian at LAPL; and at Glendale Public Library, in Armenian language collection development, programming, and reference services.

Dr. Manoogian has published numerous articles and presented papers on international librarianship and Armenian culture and heritage.  Her innovative approaches to multilingual library services have earned her recognition, as well as appreciation, reflected by numerous local, state, national, and international awards — most recently the American Library Association International Relations Committee 2006 John Ames Humphry/OCLC/Forest Press Award for her tireless efforts to revitalize the Calouste Gulbenkian Library of the Armenian Patriarchate in Jerusalem, her contributions as a consultant to libraries and librarians in Armenia, and the cooperative spirit she has fostered among librarians from the nations of the Caucasus. An on-line article, dated 29 July 2013, about her academic accomplishments and future research projects is available at www.ampersand.gseis.ucla.edu and https://www.youtube.com/watch?v=CD8gjwKnJEM