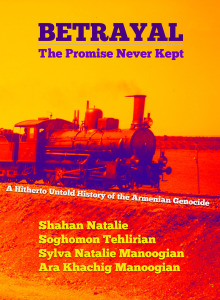 BETRAYAL: The Promise Never Kept is an untold story of the Armenian Genocide. The book was compiled by Sylva  Natalie Manoogian and Ara Khachig Manoogian, using Shahan Natalie’s unpublished notes,  intelligence documents, formerly censored pages from Soghomon Tehlirian’s memoirs and so on.

This book is dedicated to Shahan Natalie, Soghomon Tehlirian and all those who attempted to keep the promise that was made to the Armenian people by its leaders and those who today continue this important work.

At the turn of the 20th century, when the Ottoman and Russian empires were on the verge of collapse, world powers were competing to secure a share of natural resources from those failing states, most notably untapped crude oil. BETRAYAL: The Promise Never Kept is the first publication of its kind that chronicles acts of genocide and the West’s secret war for oil, as it relates to World War I.

Using never before published materials from the archival collection of Shahan Natalie, an 11-year-old genocide survivor and orphan, destined to become a journalist, poet, human rights activist and revolutionary, BETRAYAL connects the dots to reveal who was truly behind the crimes against humanity, which took the lives of around 2 million Christian Armenians living in their ancestral home, carried out by the Turks and Germans over a 30-year span (1894-1923).

BETRAYAL also shares the heretofore censored memoirs of Soghomon Tehlirian, the assassin of one of the three Ottoman leaders who masterminded the Genocide, Talaat Pasha. Included in BETRAYAL are also memoirs, writings, articles and other publications that document the infighting of the Armenian revolutionary organizations, leading up to and following the Armenian Genocide. The closing chapters of BETRAYAL explore the on-going struggle for remembrance of the genocidal atrocities committed against the Armenian people. It presents documents from nations who have officially recognized the Armenian Genocide, including Turkey, Russia, England, France, and most notably, the United States of America.